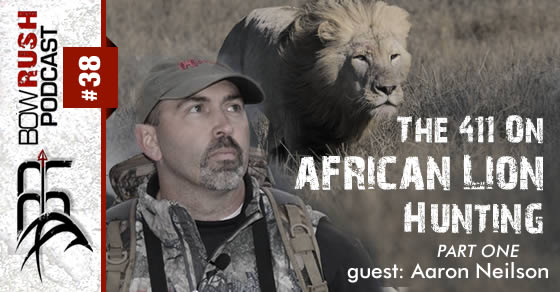 Do you even know what’s going on in Africa right now with lions?  I bet you don’t. Heck, we didn’t know the real story either and with all the news, media and their one sided agenda, it just made it even harder to get the truth.  After speaking with Cody Draper on his most resent African Lion hunt, he was adamant that we contact Aaron Neilson as he is one of the few people who actually understands the whole story.  Well, that’s who we have on here today and I assure you that you will be satisfied with what Aaron has to say.  Why do we feel Aaron is the right guy to be speaking with? Well… how about that he’s hunted in Africa over 1000 days, which is an incredible feat in itself, so we think it’s safe to say that Aaron knows what he’s talking about.

Africa is a continent, it’s not a country.  There are 54 soviet countries on the continent of Africa.

Did you like this episode? If so, please give us a positive rating on iTunes. You can use this link http://mybowrush.com/itunes * you must have an iTunes account to leave a review.

If you’ve listened to the whole podcast of each episode, you might have noticed that we added a catchphrase at the end that was sent to use by a listener.  The next one could be yours, so comment below and or send us an email with what you come up with and if we like it, we’ll use it.

If you have any questions, feel free to comment below.

I currently live in Georgia and am a whitetail fanatic but I recently spent some time in colorado and Utah. Read More...