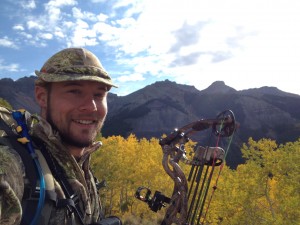 I was introduced to the outdoors at a very young age. Between sports, Boy Scouts, and competitive rifle shooting the only time I spent indoors was forced time by school administrators.

My love and admiration for Mule Deer began years before I was legally able to hunt big game. Upon my return from school one day my younger brother and I were greeted to the largest buck that I have ever seen laying in the bed of my fathers truck. The majesty and pure awe of this prairie ghost astounded me and I was hooked. I had been hunting with my father since before I can remember, literally in my mothers’ arms at the age of 3 months on an upland hunt, hunting with dad for whitetails in Nebraska but nothing that you could see above the bed of the truck.

Following my high school graduation I received a full athletic scholarship to the University of Missouri – Kansas City for the schools rifle team where I majored in Mathematics and Statistics and was forced to put my hunting on hold. After the completion of my collegiate career I moved to Colorado Springs to train at the Olympic Training Center where I was able to renew my passion for the outdoors as I began working at the local archery Pro-Shop.

I am now currently employed at Kifaru International here in Colorado, which is a pack manufacturer and lightweight shelter manufacturer.