BR037 – Alaska Caribou Do It Yourself Hunt with Anthony Dixon 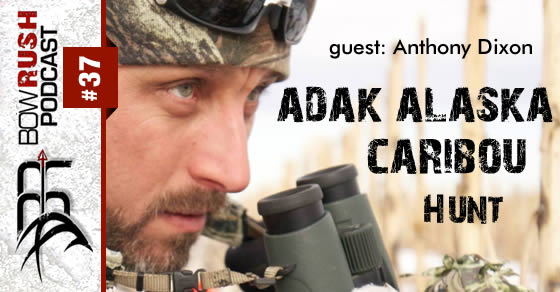 Anthony Dixon is back to share one of his extreme hunting trips that he took with Michael Waddell on Bone Collector back in 2011.  It was an Adak, Alaska Caribou hunt.  If you’ve been following our show for a while, you know that a Caribou hunt in Alaska is my Top-Of-The-Bucket-List hunts so needless to say (but I’m going to) this episode was something that I was really looking forward to recording. It was a pleasure to hear Anthony’s take on the whole experience because he set the stage really well on what it was like being out there. I hope you enjoy!

Adak is an island in Alaska where at one point in time was a military base (after research I found out it was a Naval Air Facility), but was abandoned back in 1997 and reopened as Adak Airport. The facility was designated a National Historic Landmark for its role in World War II, although most of its elements from that period have been demolished or lay in ruins.

An inside look while they were on their trip:

Did you like this episode? If so, please give us a positive rating on iTunes. You can use this link http://mybowrush.com/itunes * you must have an iTunes account to leave a review.

If you’ve listened to the whole podcast of each episode, you might have noticed that we added a catchphrase at the end that was sent to use by a listener.  The next one could be yours, so comment below and or send us an email with what you come up with and if we like it, we’ll use it.

If you have any questions, feel free to comment below.

I currently live in Georgia and am a whitetail fanatic but I recently spent some time in colorado and Utah. Read More...